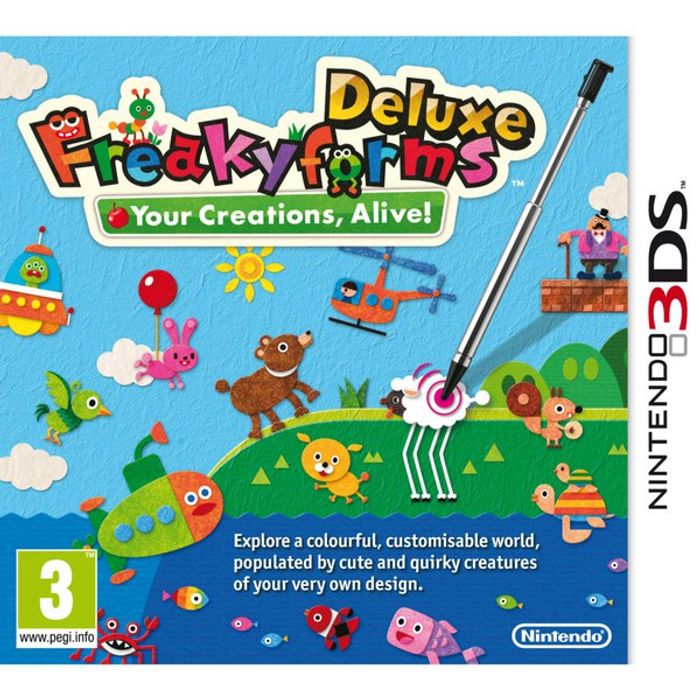 Platform
Reviewed
-
$28.39
Notify me
Currently Out Of Stock
Code Delivered To You Digitally

Breathe life into your formees and let your imagination run wild!

Formees are creatures that spring from your imagination and inhabit your Freakyforms planet. Creating a formee is simple and the possibilities are infinite - your trusty guide, Formsby, will get you started and show you the ropes! From your palette of forms, choose the colour, height and size of your formee. Tweak, copy and flip from over 600 different parts - just don't forget a mouth so your formee can speak! If you're stuck for inspiration, you can ask for a hint or try a Creation Challenge and overcome that creative block! Bring your formee to life with a heart - once you've used all five, you'll have to wait an hour for another one to appear, so make sure you're completely happy before you do! Name your creation and give it a favourite phrase for greeting other formees (formees have manners too)! Will yours be Childish? Or Angry? Choose the voice and pitch you think will suit each creation and giggle at their gibberish chatter… You can see your formee in the real world by using the "?" AR Card that came with your Nintendo 3DS system!

Explore your World!
Now you're ready to start exploring your planet! Moving through the side-scrolling world is satisfyingly simple. Just touch and hold with the stylus in the direction you'd like to move, pull the blue circle down and release to jump - handy when you can't quite reach that tasty morsel of food or break a hard-to-reach block. Each exploration session has a time-limit, so it's up to you which challenges and activities you take on each time…

Egg-citing finds!
Your formee might lay an egg after eating - there are different types and you can break them open at the end of the game to reveal some nice surprises. If you're lucky you might get the one-shot jackpot!

Coins and chests
Along your journey it’s worth collecting any coins you might come across so you can buy some cool new stuff later on. And if that wasn’t enough, you can also find keys for unlocking chests. Wonder what treasures you might find?

Challenge me!
Try to accept some quests from formees you meet whilst out and about - you might get to play a ‘mini-game’, make a delivery or take part in a poop challenge! Yes, a poop challenge!

Scenery shenanigans
Your design talents aren’t limited to your formees. You can also add your fancy flair to the world around you – colour and shape them as you wish! How about a square-shaped cloud or a two-headed butterfly?

Trophy collection
You can unlock special trophies for hero-worthy achievements!

Dungeons
When you've seen enough action above-ground, how about heading down below for a bit of battling? Dungeons are unlocked while exploring, when each location has been expanded. Once inside you'll be thrown into battle against other formees. The aim is to work through three floors of the dungeon, culminating in an epic battle against the dungeon boss. When you complete a dungeon, you'll unlock "special actions" you can get from the in-game shop. Special actions are unique abilities - they could be different animations or sounds that your formee can equip later on and will help you during battle. Can you unlock them all?

What type will you be?
Each formee gets divided into a type, which then determines how they'll match up against other formees in the dungeon - you might be Defensive, but you'll be strong against a Speedy type! One of the best features of Freakyforms Deluxe is that you can share your creations with other players. Get inspiration from their efforts or just laugh at them - you won't believe what some people come up with! There are many ways to share your formees, and with Nintendo 3DS it couldn't be easier...

QR Codes
You can also get snapping and take pictures of your formee, then convert it to a QR Code image. You can send the QR Code to somebody, and also read images somebody else has made and sent to you. Scan the QR Code now and this formee can be yours! All you need to do is open up your Freakyforms Deluxe game, go to the "Play" option on the main menu, select "Camera" and then capture the QR Code image!

Formees Together
As well as sharing your own formees, there’s also Formees Together, where up to four players can join in the fun and create formees at the same time over Local Play or Download Play. The host player can send a message before starting (maybe deciding on a theme) and then each player creates something. Once everybody’s finished, the formees are displayed and can be saved to an SD Card. If you played the first Nintendo eShop Freakyforms: Your Creations, Alive! game, you’ll be delighted to hear that you can add formees from this game to Freakyforms Deluxe via QR Code. Please refer to the electronic manual for instructions on how to save QR Codes of formees to an SD card. The original Nintendo eShop game will eventually be updated so that all formees can be shared across both versions. Although use is limited in the first Freakyforms game, any formees, including new parts, from Freakyforms Deluxe can be viewed and saved via StreetPass or QR Code.