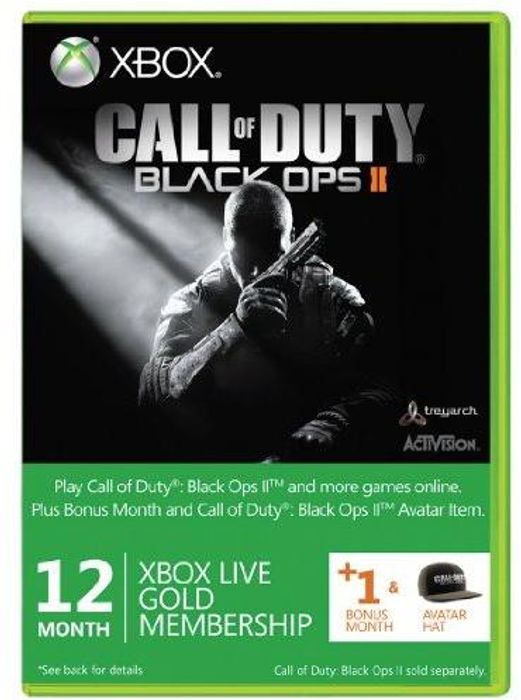 This is only the Xbox Live Gold Membership, and you will need to buy the base game separately.

Once your payment has been processed successfully, you will receive a confirmation email with the activation key.

In order to activate your Xbox Live Gold Membership you’ll have to go on your Xbox One or 360 console. Once you’re on your console, navigate to the category: My Xbox and select manage account. You should be able to see memberships, which will give you the status of your current subscription. When you do have the redeemable code ready, simply redeem it by selecting redeem code.

Since its inception, Xbox Live has revolutionized the way online gaming is played. With 12 + 1 Month Xbox Live Gold Membership – Black Ops II Branded, you’ll be able to get an array of extras and add-ons for your Xbox One and 360 console. You’ll also be able to enhance your Black Ops II gaming experience by using Xbox Live to play with your friends and others worldwide. This package includes a 12 month Xbox Live Gold Membership along with one extra month. You can gain access to an assortment of social media sites, such as Facebook and Twitter. This bundle will also allow you to use unlimited online multiplayer gaming features on a variety of games. You may also qualify to gain early access on some content with your membership. Overall, this Xbox Live Gold Membership will feature: