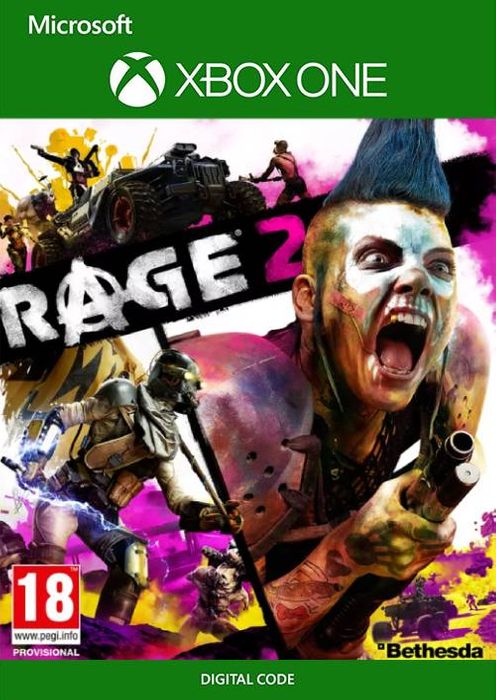 Genre
Action, Adventure, FPS
Be the first to review this product
Write a Review
Special Price $58.59 RRP $68.99
Notify me
Add to Wish List
Platform
Xbox Live
Region
Worldwide
Availability
Out of stock
Delivery
Instant Delivery
Information
Remember the post-apocalyptic world that was left behind when the destructive asteroid came crashing into the Earth in RAGE? RAGE 2 is set decades after where mankind is on its last legs and the earth is even more unforgiving than before.
You will follow the story of Walker, the last ranger of the Vineland as he attempts to survive in the dangerous world that he was born into. His ultimate mission? To take down the tyrannical Authority. This open-world offers insane action featuring a wide range of weapons, interesting powers and dangerous mutants to fight.
The open-world in RAGE 2 is incredibly diverse and you will battle enemies in a range of conditions including open deserts to over-grown and mysterious forests. The remaining lives have learnt to survive in this challenging world, and now it’s Walker’s turn.
RAGE 2 has various scenarios for you to take part in other than shooting bandits offering incredibly interesting and diverse gameplay.

• WELCOME TO THE SHOOTERVERSE
id Software’s shooter pedigree and Avalanche Studios’ open world prowess is dream-team-made-real for RAGE 2. It’s more than a shooter, more than an open world game – it’s a shooterverse.
• THE WASTELAND AWAITS
Seamlessly traverse a vast and varied landscape, from lush jungles and treacherous swamps to sun-scorched deserts in your pursuit of The Authority. The wasteland is massive, and you’ve got the arsenal to fight for every inch.
• PEDAL TO THE METAL
From monster trucks to gyrocopters, use an assortment of rugged and wasteland-ready vehicles to speed across the badlands. If you see it, you can drive it.
• THE LAST RANGER
Bring the pain using a collection of upgradable weapons, devastating Nanotrite powers, and Overdrive, the ability to push your guns beyond their mechanical limits.
• FACTIONS & FOES
Fight against ferocious factions for control of the wasteland, each featuring a rogue’s gallery of madmen, mutants, and monsters hungry for blood.
Videos
Screenshots
Reviews
Write Your Review
Activation