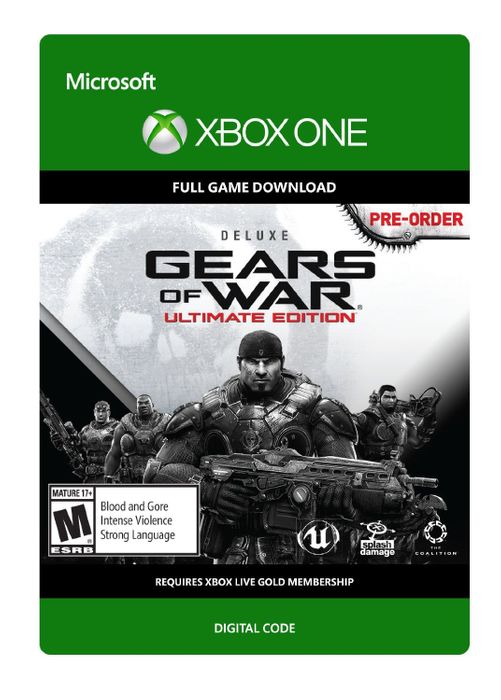 Stunningly Remastered and Modernized for Xbox One

The landmark original Gears of War has been completely rebuilt from the ground up in full 1080P. Every aspect of the game including lighting, environments, characters, and cinematic scenes have been beautifully recreated - this is the first at its best!

The most visceral online shooter returns, now at 60 FPS on dedicated servers. Includes all original 19 maps remastered and six competitive modes including new Team Death Match, updated King of the Hill and a special 2v2 mode designed by the Gears community.

*Includes Xbox 360 titles Gears of War, Gears of War 2, Gears of War 3 and Gears of War: Judgment. Each title will work as part of the Xbox One Backward Compatibility program upon Backwards Compatibility general availability – expected fall 2015.  To qualify purchase, play Gears of War: Ultimate Edition on Xbox Live between August 25, 2015 and December 31 2015.  Must be 17+.  Xbox One, broadband internet (ISP fees apply) and Xbox Live membership required. Dates, content, and features subject to change. Not available in all markets (like Germany and Australia). Xbox One Backward Compatibility feature works with select Xbox 360 games, see http://www.xbox.com/xbox-one/backward-compatibility. Xbox 360 accessories and Kinect, and games requiring those accessories, are not compatible with Xbox One consoles. Xbox Live and broadband internet required for initial download of game to console