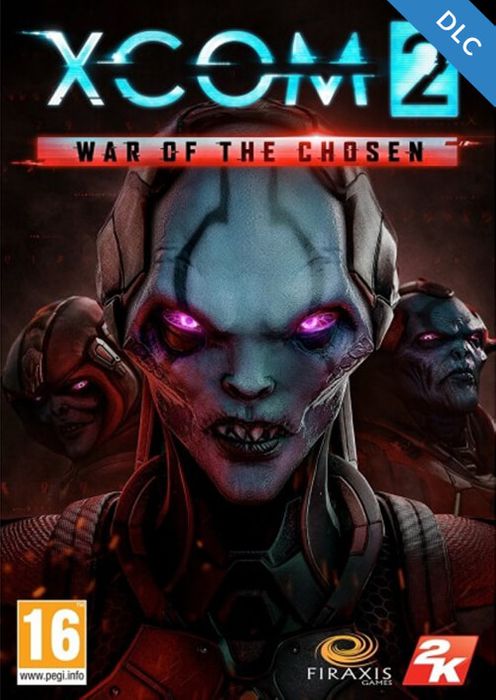 XCOM® 2: War of the Chosen  is the expansion of the title awarded as the strategy game of the year in 2016.

XCOM® 2: War of the Chosen  incorporates extensive new content into the fight against ADVENT when more factions of the resistance are formed to finish with the alien threat on Earth. In response, a new enemy emerges, the "" Chosen "", whose only objective is to recapture the commander. The expansion includes new enemies, missions, environments, classes of heroes to face the "" Chosen "" and a more complete game strategy.

NEW FACTIONS AND CLASSES OF HEROES

Three new factions emerged to reinforce Earth's resistance: Reapers, Guerrillas, and Templars, each with different abilities and opposing philosophies. These factions provide powerful heroic soldiers to help in the missions and offer more opportunities at the strategy level.

The Chosen are the most astute enemies that XCOM has ever faced and each has its own strengths and weaknesses, which will be seen in each new campaign. The Chosen go on the hunt for the commander and will kidnap, interrogate and kill the XCOM soldiers to achieve their goal. The Chosen can also break into the strategic plane and disrupt XCOM's global operations. Find and assault the strongholds of the Chosen to defeat the enemy once and for all.

A new and deadly alien - known as a Specter and capable of creating dark doubles from XCOM soldiers - has infiltrated the battlefield. It adopts new tactics to counteract it, in addition to the explosive attacks of the ADVENT Purifier and the ADVENT Priest, which overflows with psychic power.

NEW ENVIRONMENTS AND OBJECTIVES OF MISSIONS

Carry out tactical missions in new environments; from cities abandoned and ravaged by alien biological weapons during the original invasion to underground tunnels and remote xenoform regions.

IMPROVEMENTS IN THE STRATEGIC PLAN

Manages XCOM's relationships with factions and counteracts the operations of the Chosen from the Avenger. Use the new orders of resistance to prioritize your personal strategy. Now you can deploy soldiers, scientists and engineers in covert operations that grant supplies and increase the sympathy of the factions by completing them.

Soldiers can develop links with compatible partners and thus achieve new skills and improvements. The situation reporting system adds new modifiers to the tactical plane to make sure that each mission offers a unique challenge. Advanced campaign options allow you to more accurately adjust the duration and difficulty of the game.

Follow the perfect strategy in the new challenges of the community to get the first place in the global scoreboard. You will only have one chance!

Customize your soldiers and make them pose and then add filters, texts and backgrounds to create your own resistance posters to appear in the game and share them with your friends.