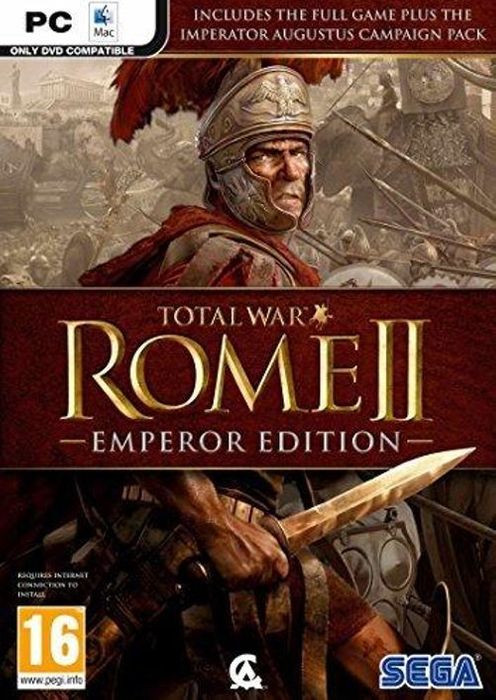 Platform
Reviewed
-
Special Price $23.39 RRP $28.29
-17%
Notify me
Currently Out Of Stock
Code Delivered To You Digitally

Emperor Edition is the definitive edition of ROME II, and contains an improved political system, renewed construction chains, rebalanced battles and better graphics both in campaign and in battle.

Emperor Edition contains all the free feature updates added since its launch in 2013, including bug fixes, balancing, Twitch.tv integration, touch screen and Mac compatibility . Italso includes a free pack of DLC's. the campaign «Emperor Augustus» . that continues after the death of César.

The Emperor Augustus campaign pack and all the content and features of the Emperor Edition are free, through automatic updating, for all those who own ROME II.

About the Emperor August campaign

pack The Emperor August campaign pack is a new playable campaign for ROME II, which rivals size in the great original ROME II campaign. This campaign is part of Total War ™: ROME II - Emperor Edition and is available free as an automatic update for those who own Total War ™: ROME II.

The Campamento Emperador Augusto pack is set in the year 42 a. C., during the chaotic period after the brutal murder of César. The Republic remains united, but its soul is divided between three great men, the members of the Second Triumvirate, who hold the future of Rome in the palms of their hands.

Octavio, the adopted son of César and heir of his legacy.

Marco Antonio, loyal friend of César and his most trusted lieutenant.

Lepidus, Supreme Pontiff of Rome and the man who ensured the dictatorship of Caesar.

With the territories of the Republic divided among them and the military power of Rome at their disposal, each of the three members of the Second Triumvirate aspires to the leadership and government of Rome as their first, and only, emperor.

However, there are external forces that seek to exploit the instability of Rome and expand their own territories. Will you fight as a defender of Rome and defeat the other members of the Triumvirate? Or will you lead another faction in a campaign of conquest and expansion, taking advantage of the chaos of the Roman civil war?

How far would you go through Rome?

The award-winning Total War series returns to Rome to further raise the bar for quality in strategy games. Become the world's first superpower and lead the most incredible war machine of antiquity. Dominate your enemies by military, economic and political means. Your promotion will attract both admiration and envy, even on the part of your greatest allies.

✢ Form vast armies and throw yourself into the battlefield in combat mode in real time. Test your tactical skills as you directly control tens of thousands of men who clash in epic battles over land and sea.

✢ Play for the glory of Rome with one of the three families or take control of a huge variety of rival civilizations, each of which offers a different gaming experience and hundreds of units of its own, from siege weapons and heavy cavalry to Legionnaires with armor and furious barbarians.

✢ See exotic ancient cities and colossal armies rendered with incredible detail while fighting battles that will cut your breath. The camera's detailed perspectives allow you to see your men shout victorious or scream in pain at the front, while a new tactical camera provides a global view of the battle with which to better inform you to make your strategic decisions.

✢ Extreme flexibility to adapt to the capabilities of your team: the game's performance and graphics are optimized to work correctly in both high-end and low-end hardware.