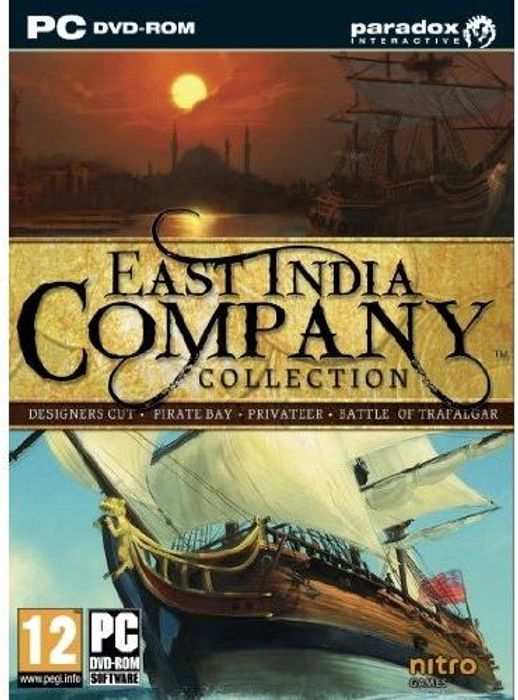 Platform
Reviewed
-
$13.49
Notify me
Currently Out Of Stock
Code Delivered To You Digitally

Information
BUILD THE WORLD’S MOST POWERFUL TRADING EMPIRE
In East India Company, you assume the role of Governor Director and seek to ship precious cargo to Europe in order to amass vast wealth. Build your fleets, establish connections to distant countries and dominate the other rival empires.
East India Company – Collection bounds together this trade oriented strategy game and its add-ons. This is the definitive collection of 17th century trade and naval battles!

Features:
East India Company:
• Spectacularly cinematic and epic naval battles
• Two Command Modes: Give orders to all your ships in Real-Time Strategy Mode or take the helm of a single ship in Direct Command Mode
• Choose from over 10 realistic ship types, from small sloops and cutters to warships and East Indiamen
• Take over ports and protect your shipping routes to create the largest trading empire

East India Company: Pirate Bay:
• Play as a pirate captain
• Attack trade ships to loot their cargo or commandeer whole ships
• Add more and larger ships to your fleet
• Choose new skills for your captain as he levels up
• Hoard as much money as you can in 30 years time
• Upload your campaign result to your gamer profile and compete for the title of the best pirate ever

East India Company: Privateer:
• Two Privateer campaigns set in different time periods
• Two new multi-player modes: Breakthrough and Beehive
• New goal-oriented gameplay with several new mission types: locate and either sink or capture enemy ships, blockade enemy ports, or escort friendly fleets
• New commander skills to fit the life of a privateer, such as “False Colors,” which allows the player to get close enough to ambush the victim, and “Critical Hit,” which gives the player a chance to hit an enemy ship’s magazine, causing the vessel to explode
• New specialists, such as the surgeon, cook, constable, and marine officer, who can be used to boost the abilities of your fleets

East India Company: Battle of Trafalgar:
• A re-enactment of the Battle of Trafalgar from both the British and Franco-Spanish perspective
• Historically accurate ships from all three Navies
• Five real-life naval commanders from the era, including Admiral Lord Nelson, French Admiral Pierre Villeneuve and Spanish Admiral Federico Gravina
• Take control of naval battle groups comprising of the greatest warships of the Napoleonic era
• Real-world naval strategy of the era accurately recreated in the battle AI